Home Finance Oil slides from multi-year highs after OPEC cancels meeting
Our website publishes news, press releases, opinion and advertorials on various financial organizations, products and services which are commissioned from various Companies, Organizations, PR agencies, Bloggers etc. These commissioned articles are commercial in nature. This is not to be considered as financial advice and should be considered only for information purposes. It does not reflect the views or opinion of our website and is not to be considered an endorsement or a recommendation. We cannot guarantee the accuracy or applicability of any information provided with respect to your individual or personal circumstances. Please seek Professional advice from a qualified professional before making any financial decisions. We link to various third-party websites, affiliate sales networks, and to our advertising partners websites. When you view or click on certain links available on our articles, our partners may compensate us for displaying the content to you or make a purchase or fill a form. This will not incur any additional charges to you. To make things simpler for you to identity or distinguish advertised or sponsored articles or links, you may consider all articles or links hosted on our site as a commercial article placement. We will not be responsible for any loss you may suffer as a result of any omission or inaccuracy on the website.
Finance

(Reuters) – Oil slipped on Tuesday, pulling back from its recent rally, after OPEC+ producers cancelled a meeting due to clashes over plans to increase supply to meet rising global demand.

Ministers from OPEC+, which groups producers from the Organization of the Petroleum Exporting Countries (OPEC) with Russia and others, abandoned talks on Monday as negotiations failed to close divisions.

Discussions dissolved after Saudi Arabia, the largest OPEC producer, and United Arab Emirates were unable to agree over the terms for increasing supply.

Initially, oil rallied on news of the breakdown in discussions, but prices retreated as traders focused on the possibility that the strife will cause some national producers to open the taps and start exporting more barrels.

“The market is concerned that the UAE will step in and unilaterally add barrels and other people in OPEC will follow suit,” said Bob Yawger, director of energy futures at Mizuho.

The United Arab Emirates said it would go along with output increases but rejected a separate proposal to extend curbs to the end of 2022 from an existing April deadline.

Some OPEC+ sources said they still believed the group would resume discussions this month and agree to pump more from August, though others said current curbs might remain in place.

No date for further talks has been announced.

Analysts expect U.S. producers to start adding to supply after months of subdued activity due to higher prices. U.S. production is currently around 11 million bpd, meaning there is room for output to increase before coming close to the U.S. record of nearly 13 million bpd reached in 2019.

“Activity in the Permian Basin is getting frenetic,” said John Kilduff, partner at Again Capital LLC in New York. 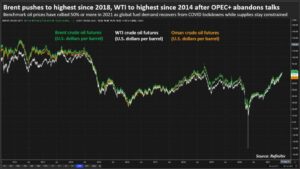 Goldman Sachs said the collapse of the talks had introduced uncertainty into OPEC’s production path. The bank said it still saw Brent reaching $80 per barrel early next year.

“The differences between both parties seem surmountable as they agree on ramping-up production into year-end with the still high uncertainty for 2022 oil balances making a pledge to any long-term commitment unnecessary today,” the bank said.

The Biden administration is pushing for a compromise solution in the talks, a White House spokesperson said on Monday.

Iraqi Oil Minister Ihsan Abdul Jabbar on Monday said that his country did not want to see oil prices soaring above current levels and that he hoped that within 10 days a date would be set for a new OPEC+ meeting.