Home Finance Yields rise, stocks nudge higher after U.S. jobs data
Our website publishes news, press releases, opinion and advertorials on various financial organizations, products and services which are commissioned from various Companies, Organizations, PR agencies, Bloggers etc. These commissioned articles are commercial in nature. This is not to be considered as financial advice and should be considered only for information purposes. It does not reflect the views or opinion of our website and is not to be considered an endorsement or a recommendation. We cannot guarantee the accuracy or applicability of any information provided with respect to your individual or personal circumstances. Please seek Professional advice from a qualified professional before making any financial decisions. We link to various third-party websites, affiliate sales networks, and to our advertising partners websites. When you view or click on certain links available on our articles, our partners may compensate us for displaying the content to you or make a purchase or fill a form. This will not incur any additional charges to you. To make things simpler for you to identity or distinguish advertised or sponsored articles or links, you may consider all articles or links hosted on our site as a commercial article placement. We will not be responsible for any loss you may suffer as a result of any omission or inaccuracy on the website.
Finance

By Herbert Lash and Tommy Wilkes

Yields on the benchmark 10-year U.S. Treasury note climbed past 1.6% for the first time since June, the dollar eased and stocks on Wall Street moved sideways with an upward bent.

The U.S. economy created the fewest jobs in nine months in September amid a drop in hiring at schools and worker shortages, a decline some attributed to mask requirements imposed during the surge of the Delta variant in the summer.

“The headline weakness hides an otherwise much stronger job market than we’re currently seeing,” said Russell Price, chief economist at Ameriprise Financial Services Inc in Troy, Michigan. “It’s related to mandates for vaccinations for the people who may have lost their jobs because of that.”

The September jobs report, which showed the unemployment rate falling to 4.8%, is the last one before Fed policymakers meet Nov. 2-3.

The Fed has made it clear that it does not need a blockbuster jobs report to taper in November, said Kathy Lien, a managing director at BK Asset Management in New York.

“While you’re seeing a little bit of a pullback in the dollar, I think the Fed remains on track,” she said.

A rally on Thursday had lifted global stock indexes into positive territory for the week, despite widespread selling initially as investors fretted about soaring energy prices and the prospects of faster-than-expected interest rate rises to combat inflation. 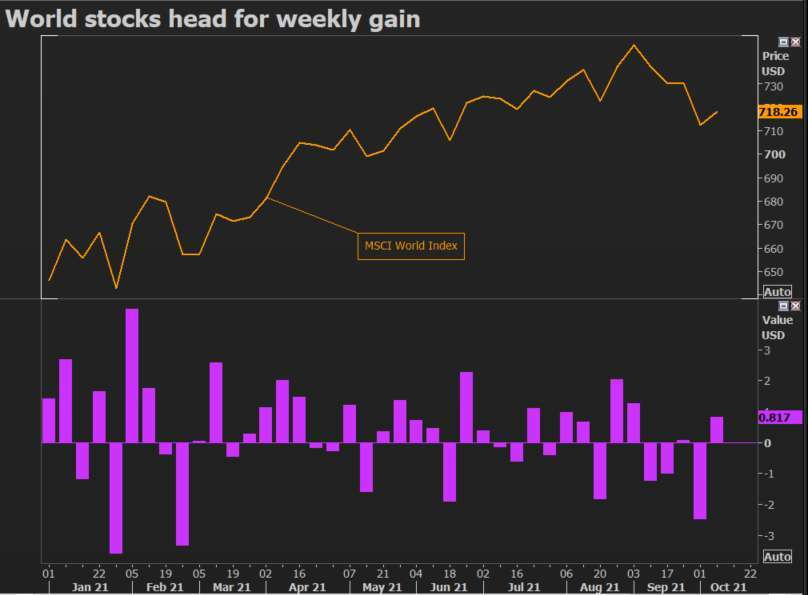 The U.S. Senate’s approval of legislation to raise the federal government’s debt limit and avoid the risk of a historic default supported risk sentiment, though it only put off a decision on a longer-term remedy until early December.

In Asia, the main share benchmark was supported by advances in Chinese blue chips, which rose 1.31% as trading resumed after the week-long National Day holiday. The improved sentiment partly stemmed from a private-sector survey that showed China’s services sector activity returned to growth in September.

Over the past three months, Chinese shares have been battered by regulatory clamp-downs, turmoil in the property sector related to China Evergrande and its vast debt, and more recently power shortages. But some investors are starting to see a buying opportunity.

However, bonds and shares issued by Chinese property firms slumped on Friday with no sign in sight of a resolution to cash-strapped Evergrande’s debt problems, which are affecting sentiment in the broader sector.

Oil prices rose on Friday to trade up 4% on the week, buoyed by a global energy crunch that has pushed natural gas prices to record highs and prompted China to demand increased coal production.

For a European Transformation sustainable investing must become...