(Reuters) – U.S. import prices fell for the first time in seven months in July, helped by a strong dollar and lower fuel and nonfuel costs, while consumers’ one-year inflation outlook ebbed in August, the latest signs that price pressures may have peaked.

That was the largest monthly drop since April 2020 and exceeded the 1.0% decline expected by economists in a Reuters poll. In the 12 months through July, import prices gained 8.8% after a 10.7% rise in June, marking the annual rate’s fourth straight monthly decline.

The report followed other tentative indications earlier this week that inflation was finally coming off the boil. U.S. consumer prices were unchanged in July due to a sharp drop in the cost of gasoline, after advancing 1.3% in June, although underlying price pressures remained elevated. Producer prices also declined last month on the back of lower energy costs. 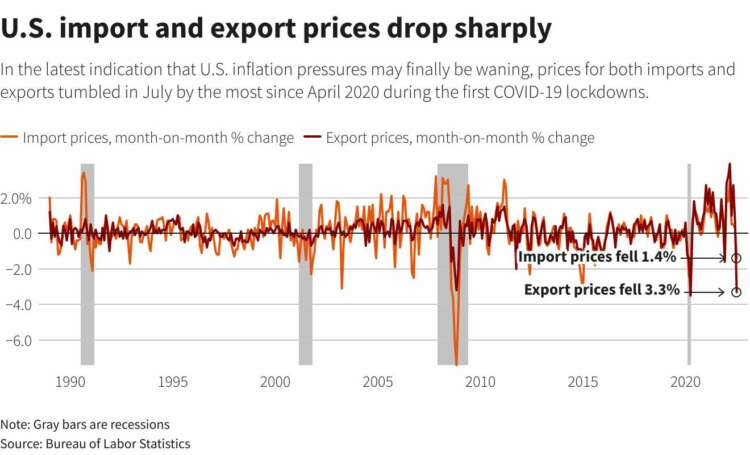 The Federal Reserve is mulling whether to raise its benchmark overnight lending rate by 50 or 75 basis points at its next policy meeting on Sept. 20-21, as the U.S. central bank battles to cool demand across the economy and bring inflation back down to its 2% goal. The Fed has raised its policy rate by 225 basis points since March.

The dollar has gained around 10% against the currencies of the United States’ main trade partners since the beginning of the year.

The report also showed export prices fell 3.3% in July after accelerating 0.7% in June. Prices for agricultural exports declined 3.0%, with the fall led by lower prices for soybeans, wheat and cotton.

U.S. consumer sentiment ticked further up in August from a record low earlier this summer and American households’ near-term inflation outlook eased again on the back of the sharp drop in gasoline prices, a survey from the University of Michigan showed.

The survey’s preliminary August reading on the overall index on consumer sentiment came in at 55.1, up from 51.5 in the prior month. It had hit a record low of 50 in June.

The preliminary August reading was above the median forecast of 52.5 among economists polled by Reuters. 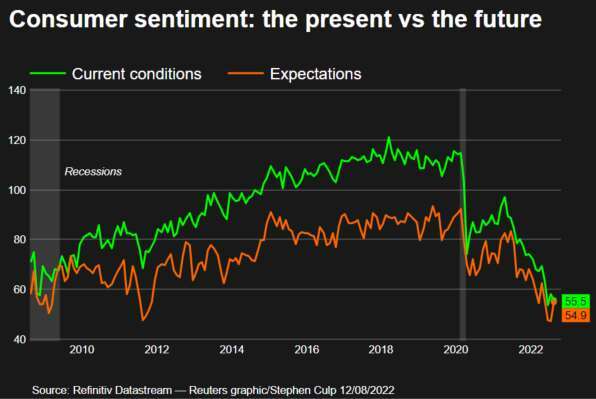