By Nevzat Devranoglu and Ali Kucukgocmen

ISTANBUL (Reuters) – Turkey’s economy grew 7.6% year-on-year in the second quarter as expected, extending a hot streak on strong domestic demand and exports, according to data on Wednesday, though economic activity was seen slowing through year end as demand cools.

Exports of goods and services increased by 16.4% in the second quarter compared with a year ago in the chained linked volume index, while such imports increased by 5.8%.

Household consumption added 13.6 percentage points to growth and foreign demand raised it by 2.7 points, according to bankers’ calculations.

“Robust growth in the first half of this year, high global energy prices and policies to shield households from the surge in inflation mean that inflation will become entrenched and the current account deficit will remain wide,” he said in a note. 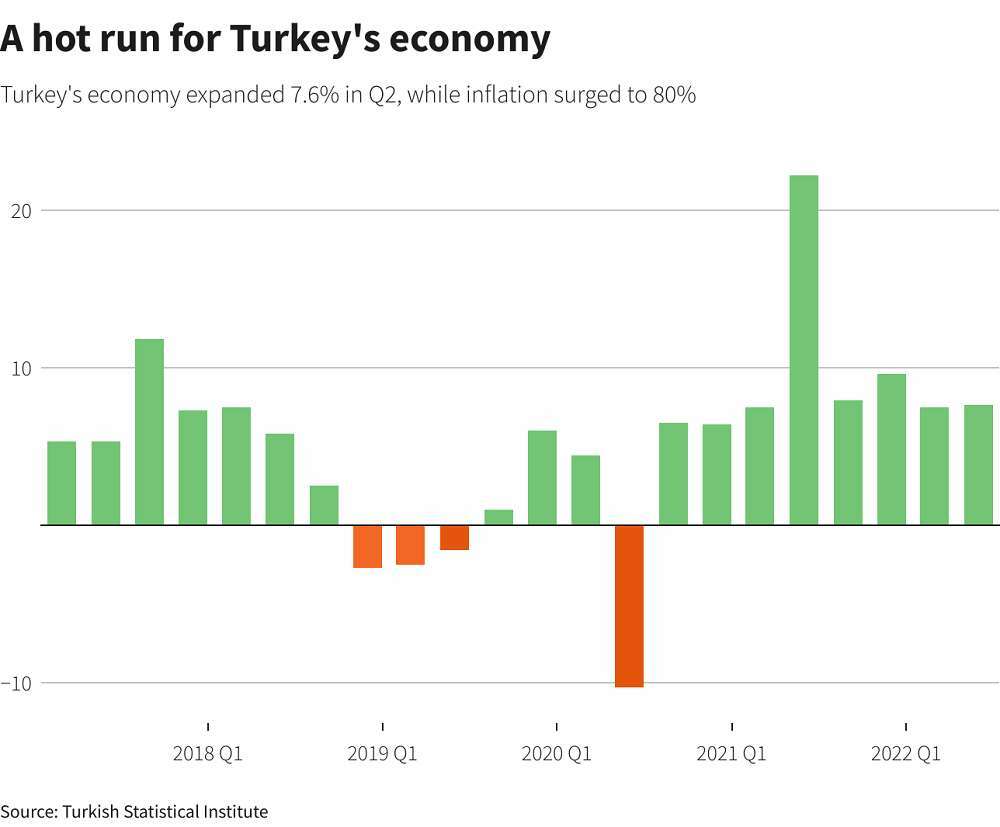 The financial and insurance sector led growth, expanding 26.6%, followed by the services sector at 18.1% and professional and administrative support services at 11%. The industrial sector expanded 7.8%.

Banks’ profits soared this year as they continued to lend with rates much higher than the central bank’s one-week repo rate, which it uses to fund the market.

The banking sector’s net profit in the first seven months of the year stood at 207.9 billion lira ($11.4 billion), up 417.2% from the same period last year, data showed on Monday. Banks’ net interest income surged 216% in the same period.

The central bank unveiled new required bond holdings for lenders last week aiming to bring the rates on corporate loans closer to its policy rate, while consumer loans and mortgages are offered at very high rates.

In a Reuters poll, the economy was forecast to have expanded 7.5% in the second quarter with full-year growth seen at 4%.

Despite inflation running at 80%, the central bank cut its policy rate by 100 basis points in August to 13%. It cited indications of a slowdown in the third quarter, adding that momentum in industrial production and a positive trend in employment must be maintained.

Economists also see growth falling in the second half of the year due to a downward trend in domestic and foreign demand, led by an expected slowdown in Turkey’s largest trade partners.

Last year, Turkey’s economy bounced back strongly from the COVID-19 pandemic and grew a revised 11.4%, its highest rate in a decade. Annual growth in the first quarter of 2022 was revised to 7.5% from 7.3%, data showed on Wednesday.

(Reporting by Nevzat Devranoglu and Ali Kucukgocmen; additional reporting by Can Sezer; Editing by Jonathan Spicer and Daren Butler)