Home Finance Global 2023 economic view downgraded, at odds with market optimism: Reuters poll
Our website publishes news, press releases, opinion and advertorials on various financial organizations, products and services which are commissioned from various Companies, Organizations, PR agencies, Bloggers etc. These commissioned articles are commercial in nature. This is not to be considered as financial advice and should be considered only for information purposes. It does not reflect the views or opinion of our website and is not to be considered an endorsement or a recommendation. We cannot guarantee the accuracy or applicability of any information provided with respect to your individual or personal circumstances. Please seek Professional advice from a qualified professional before making any financial decisions. We link to various third-party websites, affiliate sales networks, and to our advertising partners websites. When you view or click on certain links available on our articles, our partners may compensate us for displaying the content to you or make a purchase or fill a form. This will not incur any additional charges to you. To make things simpler for you to identity or distinguish advertised or sponsored articles or links, you may consider all articles or links hosted on our site as a commercial article placement. We will not be responsible for any loss you may suffer as a result of any omission or inaccuracy on the website.
Finance

BENGALURU (Reuters) – Global economic growth is forecast to barely clear 2% this year, according to a Reuters poll of economists who said the greater risk was a further downgrade to their view, at odds with widespread optimism in markets since the start of the year.

Falling energy prices, a slowdown in inflation in most economies from multi-decade highs, an unexpectedly resilient euro zone economy and China’s economic reopening have led traders to speculate the downturn will be more mild.

That has driven MSCI’s all-country world index of shares up nearly 20% from October lows, hitting a five-month closing high on Tuesday, despite the greater risk that central banks will keep interest rates higher for longer rather than cut them.

But economists as a whole were much less upbeat, paring back growth forecasts for this year and next from 2.3% and 3.0%, respectively, in an October 2022 poll to 2.1% and 2.8%, respectively. Their more dour mood flew in the face of some notable upgrades by banks in recent weeks.

The 2023 growth forecast is well behind an International Monetary Fund forecast of 2.7% that was issued in October and is due to be updated next week. The latest Reuters polls of more than 500 economists covering 45 economies were taken Jan. 5-25.

More than two-thirds of respondents, 130 of 195, said the greater risk to their world growth outlook was that it would be even slower than what they currently expect.

Much will depend on how much success the world’s major central banks can claim from roughly a year’s worth of historically aggressive interest rate hikes that are not over yet. The full impact of rate hikes can take a year or more to show up in economies.

“The market continues to price for a dream scenario of inflation having peaked, then coming down sharply, but not overshooting to the downside,” said market strategists at Rabobank, based on relatively good news in data released in the first weeks of this year.

“However … the range of scenarios ahead is truly broad, and yet the market seems to have settled for a happy median that seems the least likely to transpire.” 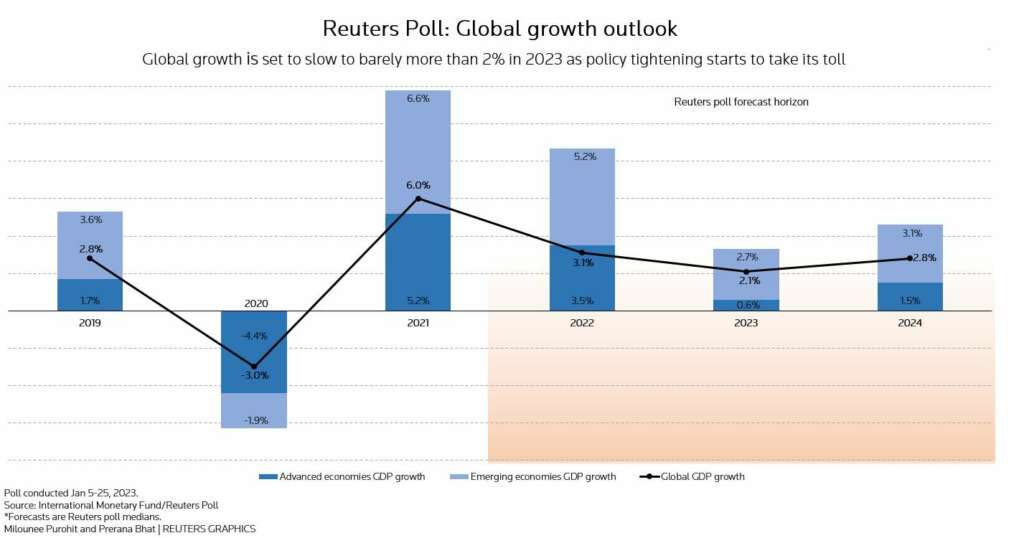 Consensus gross domestic product growth forecasts for 2023 for more than 80% of economies surveyed were downgraded from the October poll.

Inflation predictions for this year in nearly 80% of economies surveyed, 35 of 45, were upgraded from the October poll, suggesting the bias was for global central banks to maintain a tighter monetary policy for an extended period of time.

At the same time, unemployment rates were not expected to climb much from relatively low levels.

That suggests central banks have no room to even consider lowering rates any time soon.

Nearly all major central banks were expected to hold interest rates steady through the end of this year, a conclusion also at odds with rate futures, which expect easing in the fourth quarter.

The European Central Bank, the U.S. Federal Reserve and the Bank of England were expected to hike rates at each of their next two policy meetings and then hold them steady.

While the ECB was expected to deliver larger 50-basis-point hikes, the Fed was forecast to go for smaller 25-basis-point rate rises.

The BoE was forecast to lift its Bank Rate by 50 basis points on Feb. 2 to 4.00% and then deliver a quarter-percentage-point hike in March before pausing.

“We see good reasons to believe that the global economy still has a tough year ahead,” economists at Citigroup said.

“High inflation and tight monetary policy look likely to plague the outlook, and we wouldn’t be surprised to see renewed tightening in global financial conditions in coming months.” 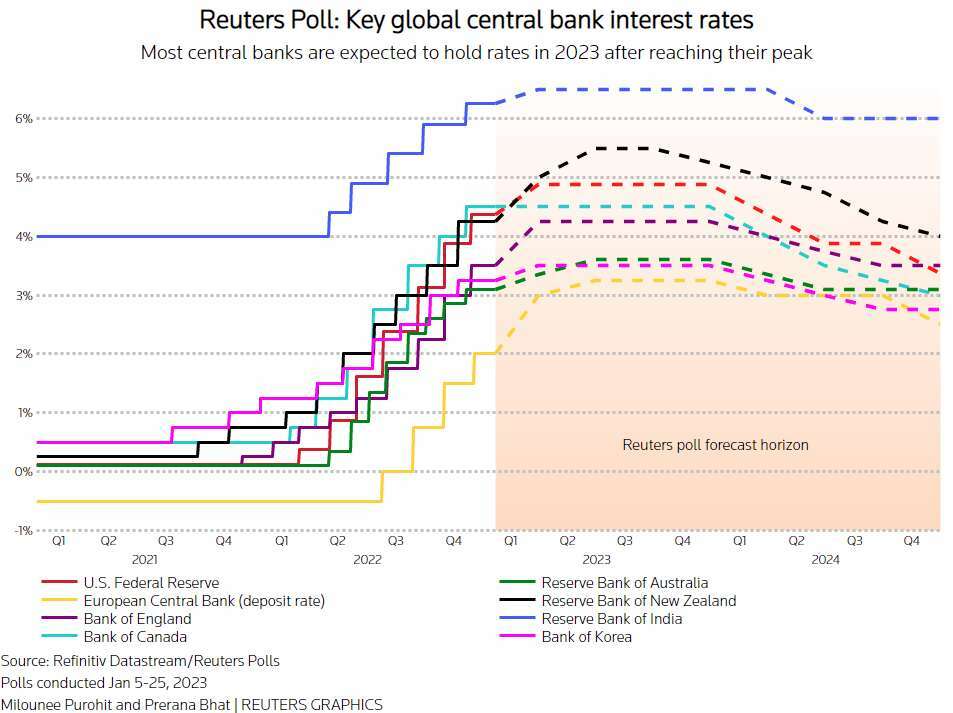 When asked to list the biggest threat to global economic growth in 2023, more than 85% of economists, 171 of 196, were split nearly evenly between tighter monetary policy (90) and persistently higher inflation (81).

Fifteen pointed to the Russia-Ukraine war, eight nodded to an asset price correction, one said a resurgence of COVID-19, and one said weaker-than-expected labour markets.

(For other stories from the Reuters global economic poll:)