Home Finance Behind FTX’s fall, battling billionaires and a failed bid to save crypto
Our website publishes news, press releases, opinion and advertorials on various financial organizations, products and services which are commissioned from various Companies, Organizations, PR agencies, Bloggers etc. These commissioned articles are commercial in nature. This is not to be considered as financial advice and should be considered only for information purposes. It does not reflect the views or opinion of our website and is not to be considered an endorsement or a recommendation. We cannot guarantee the accuracy or applicability of any information provided with respect to your individual or personal circumstances. Please seek Professional advice from a qualified professional before making any financial decisions. We link to various third-party websites, affiliate sales networks, and to our advertising partners websites. When you view or click on certain links available on our articles, our partners may compensate us for displaying the content to you or make a purchase or fill a form. This will not incur any additional charges to you. To make things simpler for you to identity or distinguish advertised or sponsored articles or links, you may consider all articles or links hosted on our site as a commercial article placement. We will not be responsible for any loss you may suffer as a result of any omission or inaccuracy on the website.
Finance

Behind FTX’s fall, battling billionaires and a failed bid to save crypto

By Angus Berwick and Tom Wilson

The reason for the mea culpa: His announcement half an hour earlier that FTX’s arch-rival, Binance, planned to mount a shock takeover of its main trading platform to save it from a “liquidity crunch.” Binance founder Changpeng “CZ” Zhao, whom the billionaire had accused of sabotage, would now be his White Knight.

The seeds of FTX’s downfall were sown months earlier, stemming from mistakes Bankman-Fried made after he stepped in to save other crypto firms as the crypto market collapsed amid rising interest rates, according to interviews with several people close to Bankman-Fried and communications from both companies that have not been previously reported.

Some of those deals involving Bankman-Fried’s trading firm, Alameda Research, led to a series of losses that eventually became his undoing, according to three people familiar with the company’s operations.

The interviews and messages also shine new light on the bitter rivalry between the two billionaires, who in recent months competed for market share and publicly accused each other of seeking to hurt the one another’s businesses. It culminated on Wednesday, with Binance pulling out of its deal and throwing FTX’s future into uncertainty.

Stuck without a buyer, Bankman-Fried was now searching for alternative backers, two people close to him said. After Binance pulled out, he told FTX staff in a message that Binance had not previously told them of any reservations about the deal and he was “exploring all options.”

Neither Binance nor FTX responded to requests for comment. Bankman-Fried told Reuters on Tuesday that “I’ll probably be too swamped” to do interviews. He didn’t respond to further messages.

Binance earlier said it decided to pull out of the deal as a result of its due diligence on FTX and news reports about U.S. investigations into the company.

Zhao’s unveiling of the planned takeover capped a stunning reversal for Bankman-Fried. The 30-year-old had set up Bahamas-based FTX in 2019 and led it to become one of the largest exchanges, accumulating a near $17 billion fortune.

News of the liquidity crunch at FTX – valued in January at $32 billion with investors including SoftBank and BlackRock – sent reverberations through the crypto world.

The price of major coins plummeted, with bitcoin slumping to its lowest in almost two years, heaping further pain on a sector whose value has fallen about two-thirds this year as central banks tightened credit.

By ditching the deal, Binance had also avoided the regulatory scrutiny that would likely have accompanied the takeover, which Zhao had flagged as a likelihood in a memo to employees that he posted on Twitter.

Financial regulators around the world have issued warnings about Binance for operating without a license or violating money laundering laws. The U.S. Justice Department is investigating Binance for possible money laundering and criminal sanctions violations. Reuters reported last month that Binance had helped Iranian firms trade $8 billion since 2018 despite U.S. sanctions, part of a series of articles this year by the news agency on the exchange’s financial crime compliance.

Zhao and Bankman-Fried’s relationship began in 2019. Six months after FTX’s launch, Zhao bought 20% of the exchange for about $100 million, a person with direct knowledge of the deal said. At the time, Binance said the investment was “aimed to grow the crypto economy together.”

Within 18 months, however, their relationship had soured.

FTX had grown rapidly and Zhao now viewed it as a genuine competitor with global aspirations, former Binance employees said.

When FTX in May 2021 applied for a license in Gibraltar for a subsidiary, it had to submit information about its major shareholders, but Binance stonewalled FTX’s requests for help, according to messages and emails between the exchanges seen by Reuters.

Between May and July, FTX lawyers and advisors wrote to Binance at least 20 times for details on Zhao’s sources of wealth, banking relationships, and ownership of Binance, the messages show.

In June 2021, however, an FTX lawyer told Binance’s chief financial officer that Binance wasn’t “engaging with us properly” and they risked “severely disrupting an important project for us.” A Binance legal officer responded to FTX to say she was trying to get a response from Zhao’s personal assistant, but the requested information was “too general” and they may not provide everything.

By July of that year, Bankman-Fried had tired of waiting. He bought back Zhao’s stake in FTX for about $2 billion, the person with direct knowledge of the deal said. Two months later, with Binance no longer involved, Gibraltar’s regulator granted FTX a license.

That sum was paid to Binance, in part, in FTX’s own coin, FTT, Zhao said last Sunday – a holding he would later order Binance to sell, precipitating the crisis at FTX. 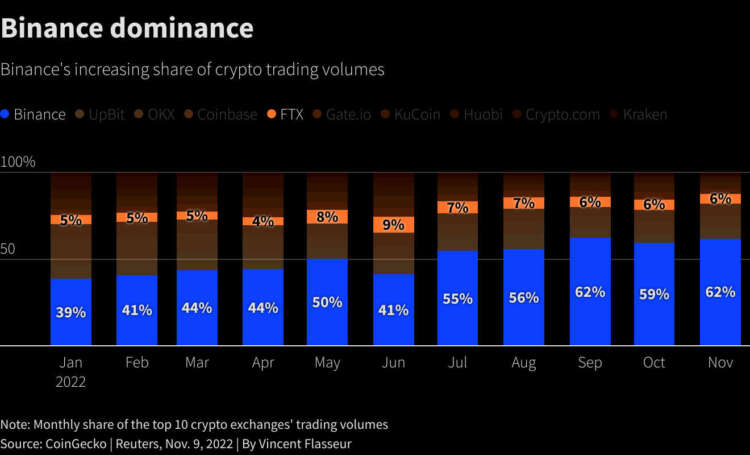 “TRYING TO GO AFTER US”

This May and June, Bankman-Fried’s trading firm, Alameda Research, suffered a series of losses from deals, according to three people familiar with its operations. These included a $500-million loan agreement with failed crypto lender Voyager Digital, two of the people said. Voyager filed for bankruptcy protection the following month, with FTX’s U.S. arm paying $1.4 billion for its assets in a September auction. Reuters could not determine the full extent of losses Alameda suffered.

Seeking to prop up Alameda, which held almost $15 billion in assets, Bankman-Fried transferred at least $4 billion in FTX funds, secured by assets including FTT and shares in trading platform Robinhood Markets Inc, the people said. Alameda had disclosed a 7.6% share in Robinhood that May.

A portion of these FTX funds were customer deposits, two of the people said, though Reuters could not determine their value.

Bankman-Fried did not tell other FTX executives about the move to prop up Alameda, the people said, adding he was afraid that it could leak.

On Nov. 2, however, a report by news outlet CoinDesk detailed a leaked balance sheet that allegedly showed that much of Alameda’s $14.6 billion in assets were held in FTT. Alameda CEO Caroline Ellison tweeted that the balance sheet was merely for a “subset of our corporate entities,” with over $10 billion of assets not reflected. Ellison did not return requests for comment.

That failed to douse growing speculation over what Alameda’s financial health might mean for FTX.

Then Zhao said Binance would sell its entire share in the token, FTT, worth at least $580 million, “due to recent revelations that have come to light.” The token’s price collapsed 80% over the next two days and a torrent of outflows from the exchange gathered pace, blockchain data show.

In his message to staff this week, Bankman-Fried said the firm saw a “giant withdrawal surge” as users rushed to withdraw $6 billion in crypto tokens from FTX in just 72 hours. Daily withdrawals normally totaled tens of millions of dollars, Bankman-Fried told his employees.

After Zhao’s tweet that Binance would sell its FTT holding, Bankman-Fried projected confidence that FTX would weather its rival’s attacks. He told staff on Slack that withdrawals were “not shockingly, way up,” but they were able to process the requests.

“We’re chugging along,” he wrote. “Obviously, Binance is trying to go after us. So be it.”

But by Monday the situation became dire. Unable to quickly find a backer, or sell other illiquid assets short-notice, Bankman-Fried contacted Zhao, according to a person familiar with the call. Zhao later confirmed that Bankman-Fried had called him.

Bankman-Fried signed a non-binding letter of intent for Binance to buy FTX’s non-U.S. assets. This valued FTX at several billion dollars, two people familiar with the letter said – enough for the exchange to cover all withdrawal requests but a fraction of its January valuation.

His employees were shocked. Even executives had been in the dark about the Alameda shortfall and takeover plan until Bankman-Fried informed them that morning, two people working with him said. Both people said they had been unaware that the withdrawal situation was so serious.

Then came Binance’s announcement on Wednesday scrapping the takeover. “The issues are beyond our control or ability to help,” Binance said. Zhao tweeted “Sad day. Tried,” with a crying emoji.

(Reporting by Angus Berwick in New York and Tom Wilson in London; additional reporting by Hannah Lang in Washington and Elizabeth Howcroft in London; Editing by Paritosh Bansal and Chris Sanders)

The impact of the cost-of-living crisis on financial...

The hidden costs when renting

Money – Is it still the family taboo