Home News Barclays warns of sub-parity euro, 5 ppt GDP hit if Russia turns off gas taps
Our website publishes news, press releases, opinion and advertorials on various financial organizations, products and services which are commissioned from various Companies, Organizations, PR agencies, Bloggers etc. These commissioned articles are commercial in nature. This is not to be considered as financial advice and should be considered only for information purposes. It does not reflect the views or opinion of our website and is not to be considered an endorsement or a recommendation. We cannot guarantee the accuracy or applicability of any information provided with respect to your individual or personal circumstances. Please seek Professional advice from a qualified professional before making any financial decisions. We link to various third-party websites, affiliate sales networks, and to our advertising partners websites. When you view or click on certain links available on our articles, our partners may compensate us for displaying the content to you or make a purchase or fill a form. This will not incur any additional charges to you. To make things simpler for you to identity or distinguish advertised or sponsored articles or links, you may consider all articles or links hosted on our site as a commercial article placement. We will not be responsible for any loss you may suffer as a result of any omission or inaccuracy on the website.
News

LONDON (Reuters) – Analysts at Barclays have warned of a 5 percentage point hit to euro zone GDP and a dive below dollar parity for the euro if Russia closes its gas taps as part of the escalating war in Ukraine.

Worries are mounting in Europe that Moscow could sharply reduce the amount of gas it supplies or even stop it altogether as tensions rise and sanctions intensify over its assault on Ukraine.

The Kremlin has already cut off supplies to Bulgaria and Poland and this week sanctioned Gazprom’s European subsidiaries including Gazprom Germania, prompting Germany’s Economy Minister Robert Habeck to warn of no more gas from Russia.

“If Russia closes its gas taps (to Europe), we expect EURUSD to fall below parity,” Barclays said in a note on the rising tensions.

“Our economists estimate that a total loss of Russian supplies, combined with rationing of the remainder, could dent euro area GDP by more than 5 percentage points over one year”.

The EU is currently grappling with Russia’s demand that countries start paying for their gas in roubles rather than euros or dollars as they traditionally have.

Bowing to such a demand could mean countries effectively breach their own sanctions brought against Russia as part of a co-ordinated move by the West to punish Moscow for its “special military operation” in Ukraine.

About 25% of the nearly 4,000 non-financial companies Moody’s analyses globally would “face significant stress” it said, although it would be a significantly higher 40% in the Europe Middle East and Africa (EMEA) region.

It “will cause significant stress around the world” Moody’s said. 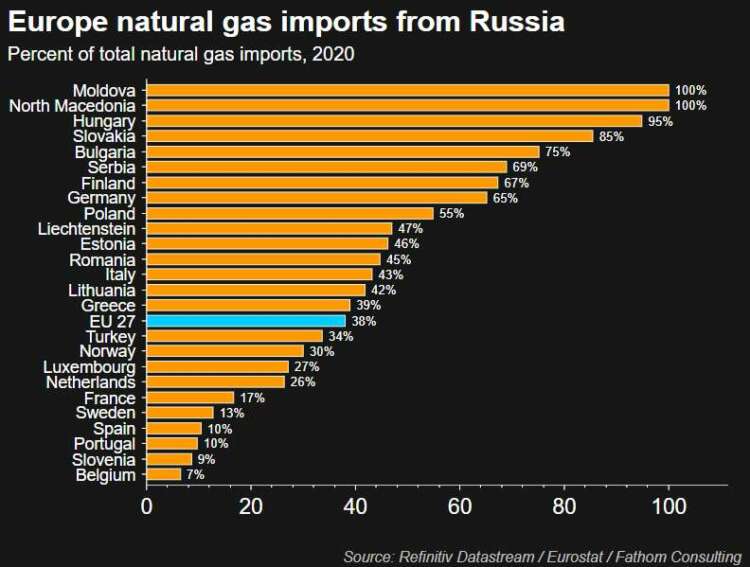